Saturday, 14th October 2017. We were off to Bristol for the weekend to take part in the ‘BBC Countryfile Ramble For Children In Need’. The Ramble wasn’t until the Sunday morning, however it was early Sunday morning so staying down seemed to be the sensible option. Owing to the fact we had to traipse into Leicester to fetch Ashley first, we were up around half 6. It was an overcast, yet warm start. Once we had Ash we began the monotonous motorway run down to Bristol – M69, M6, M42 and then the M5. The boredom of the drive was broken briefly by a pit stop for breakfast on the M5 services. It was only 9 am when we reached the services. We all had a full fry up, then did a bit of shopping! The sky was still very grey, which did not bode well for the weekend.

After an hour or so we set off to see some friends in Gloucester, then we went off to the National Arbouritum. It has hundreds of different tree and plant species and all were a multitude of Autumn colours. We spent over an hour exploring the place, and as with everywhere we go, we ended up in the gift shop. We did not leave ourselves enough time to fully explore this huge attraction, as the grounds stretch out for miles (so it seems), so it is on our Re-Visit list. The hotel was another half hour drive from the Arbouritum. We were staying at the Holiday Inn Filton. A very odd building, and relatively dilapidated. Big car park though! Once settled in, Erin and I went for a swim, then it was drinks and dinner and a relatively early night in anticipation of tomorrows Ramble. 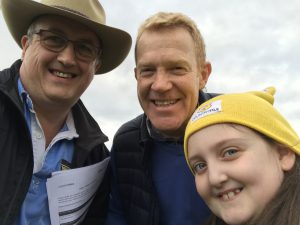 Adam Henson posing with us

Sunday 15th October 2017. We were up at the crack of dawn (well, 10 to 7). Following a quick coffee and a shower, we got the car packed up and checked out. As Shani was doing the ramble in her wheelchair, we had to drive to the finish point, Ashton Court, and then a mini bus ferried us, and others with mobility issues, to the start point. The start point was the Observatory next to the Clifton Suspension bridge. With the exception of a minor mishap involving the wheelchar, lining up correctly and bus ramp (use your imagination), we got to the base of the observatory in one piece.

The physical trials of a ramble hit us earlier than everyone else as we had to push Shani around to the base of the observatory and then up the hill. I about died doing that, having no help from anyone. Once up there we had to check in and hang around in what amounted to a holding pen, where we could buy food and be entertained by some local variety acts of one sort or another. Whilst there we did manage to meet Adam Henson, the Countryfile presenter assigned to our ramble, and have a selfie/chat with him. Very amiable bloke. Due to the joys of television, we had to hang around for hours. We eventually set off at half eleven. We all walked back down the hill – to another holding pen! Luckily I spotted a Discovery which was being used as the event ambulance so all was not lost! Once at the second holding pen, they were letting us walk across the Clifton Suspension Bridge in groups. They had actually closed the bridge for this event, so it was awesome walking down the middle of it. We were all told not to look up as we were being filmed by a drone. Also awesome. The rest of the ramble was very slow. We had to stop at regular intervals for 10 to 15 minutes or more while they filmed segments for the TV show.

It took the 623 of us who turned up (1200 were meant to be there) around 2 and a half hours to walk the 4.5 k route. Without TV stops it would have taken about an hour! As we crossed the finish line, we all got  a certificate for completing it. By now it was 2 pm and we were all knackered after the early start and the long walk. Everyone was glad it didn’t rain, although the skies were dull and threatening most of the way. We decided not to waste the rest of the day and headed down to the quayside, near the SS Great Britain. Had a stroll along the river and had a great meal in a  Greek street restaurant, which was part of a complex of restaurants house in old shipping containers. Very trendy!

We said our goodbyes to Bristol at 5 and headed home. We had a quick coffee pit-stop on the M42, dropped Ash home and eventually got to our abode by 10 pm. A long weekend indeed, but such fun! 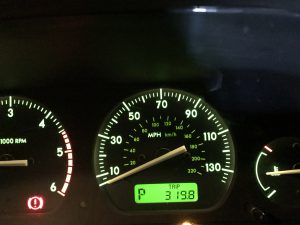