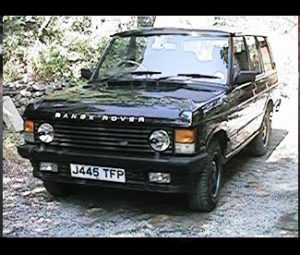 We kick-started our Land Rover ownership as a family when my Dad got this 1992 Vogue SE 3.9 litre V8 Range Rover from a friend of ours, who himself had it from new. Dad got it around 1995, and we had it until 28th November 1998, when he traded it in for a brand new 50th Anniversary Freelander.

I have remarkably few photos of this car, although it was probably (with the exception of my first ever car – a 1974 Mini Clubman) my most favourite vehicle ever. A brilliant drive, with comfort and power to match. By modern standards it is none of those things but back in the day, as far as I am concerned, few cars could touch it. Originally codenamed ‘Velar’, the first Range Rovers were launched to the public in June 1970. After a production total of 317,615 vehicles, the last Range Rover ‘Classic’ drove off the production line on Thursday 22nd February 1996.