With various forces conspiring against us, we were not able to explore for a couple of weekends toward the end of May 2017. We did, however, have to go to Leicester a couple of times for various reasons. As a result, we started to actually take a look at the city which is the heart of our county. Like most people, I take for granted places I go to regularly. This is especially the case with Leicester. You normally go to town on a mission – be it shopping, sport, hospital and so on. Sometimes it is a good idea to stop and take a proper look. This is what we have started to do, so we will put some galleries together over the coming months, years, decades possibly!

Parked up at the phoenix

It turns out that a lot of history occurred in Leicester, from the Romans to Richard III and beyond. In terms of driving, its basically a 26 mile round trip from home to the car park we use the most – The Phoenix Arts Centre car park. It probably has an official name, but that is one mystery I will not be rushing to solve!

As luck would have it there was an event occurring during our first exploration trip into town. Morris Dancing. Lots of Morris Dancing. Dozens of dancing troupes were performing at 19 locations throughout the city. For anyone who doesn’t know, Morris Dancing is traditional English folk dancing which can be dated back to the 13th century. It made for a very bright and noisy addition to an already vibrant day in the city. We had to take a break from the festivities at Mrs Bridges Tea Rooms. Could it be more of an English spring day?! I almost rushed out and got a St Georges Cross tattoo, but luckily restrained myself. On the same day we strolled around the market, both indoor and outdoor versions.

On that day and on a later stroll around, we lamented the loss of several old shops, some of which were in landmark buildings (such as Fenwicks). The face of the city centre has changed so much in our lifetime, that it makes you wander what the future holds. Have a look at the ‘Leicester May 2017’ gallery for more interesting photos and information. 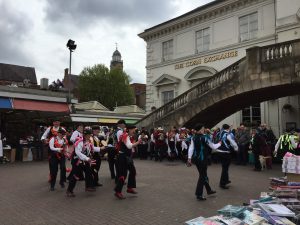