14th May 2017. Although this was not a day out per se, it was a place we went to, whilst out for the day. We happened to be scoffing at the Phoenix when a friend posted a video on Facebook. He was driving his Land Rover Defender through some water, whilst a saloon car sat there not daring to drive through. He went through like a hot knife through butter. He then put up #becauseican. First thought was – we will have some of that!

The TD4 has not done a lot of purposeful wading. By not a lot, I mean basically none. I hadn’t done any for some considerable period of time, but remembered the basics. One of these being that the wading depth for the Freelander 1 is 1400 mm (as recommended by Land Rover in the user manual). There had been a drop of rain or two that day, but this had abated by the time we found the spot. For anyone local it is between Huncote and Earl Shilton. 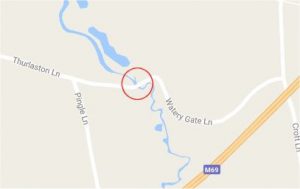 I attached the GoPro to the front of the car before we left Leicester, and began recording as we approached the ford. In my haste to play, I forgot the golden rule of driving through water. Stop and have a proper look first. I didn’t, and just ploughed into it. I was driving slowly, but not as slowly as I possibly could have, especially considering the foot and a half of water was a bit deeper than the recommended limit (by about 200 mm). Water came up over the bonnet and there was a large amount of steam bellowing out from under the bonnet. This was just the water hitting the hot engine and evaporating, not any damage to the car. What I hadn’t realised at that stage, and only picked up after my fourth trip through the ford, was that the under car protection for the engine (a plastic sheet under the engine bay) had been partially ripped off by the force of the water. Having had our fun we headed home but not before stopping to jack the car up and pop the protection tray back in place! Much fun had by all – results available on YouTube!

Watery Gate Lane, with me in it!