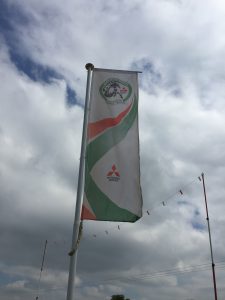 We were all set to get up at 6 and be on our way by 7 as its a trek to get there, but as usual we ran away from us and we ended up leaving at 7.50 a.m. It was cold and overcast, so we wrapped up warm. First stop was the garage to fill up and diesel, and grab a copy of the Sunday Times (with this years Rich List attached). We then began the trip down a series of motorways. It was about as interesting at the French Presidential election (which was also taking place today). M6 to M42 to M5. As per last weeks outing,  only the last 20 miles or so were on any vaguely interesting roads. With only a quick stop on the M5 for a Micky Dee’s breakfast, we were off the motorways by around 10 a.m. Went through some picturesque villages including Cockadilly near Nympsfield (I kid you not, its just of the B4066 not far from Stonehouse). Anyway, we eventually arrived around 10.30 a.m.

The sun had began to break through but it was still a bit on the chilly side as we parked up, sorted some kit out and headed to the arena. It was heaving. The Cross Country had finished, so it was Show Jumping for the horse and riders. The actual arena on Show Jumping day is a ticket only affair, but there are some decent size screens around the ground where you can catch the action. Before all that we hit the stalls. Clothes, food and horse gear everywhere. We visited our friends at the Festival Of Food marquee. Um Bongo is back! We also picked up some funky cooking oils while we were there. We trawled through many of the clothes stalls and also had a look at a classic Mitsubishi Colt that was on display. Some amazing food was on offer. We tried some Wild Mallard, lots of Venison. I had a gourmet Lamb & Mint burger, and plenty of whippy ice cream was consumed. The sun came out with a vengeance, and the afternoon enjoyed a total heat-wave. 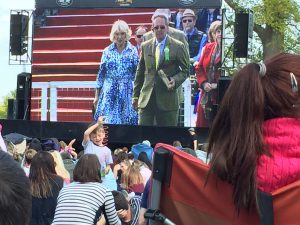 The Duchess Of Cornwall

As we headed over to the big screen, we stopped by the Badminton School stall and enjoyed some flapjack as well as learning a bit of science. The big screen area was fairly full, and was also surrounded by food and drink stands. We even bumped into some friends from our neck of the woods. There was a lot of pomp and ceremony in the show jumping arena as the Duchess Of Cornwall was in attendance. I managed to grab 40 winks whilst sitting on the grass. Erin played with some of her friends from home as well as some new friends she had made whilst sitting there. We stayed for over an hour before going for a slow stroll around the arena and back to the car. 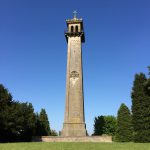 It didn’t take too long to get out of the car park (which resembled a Land Rover showroom). We then had a nice meander along country lanes back to the motorways. There is lots of lovely rolling farmland and some quaint villages on the way, and we stopped to take photo of a very interesting building on the edge of one such village. No idea what it is – send any information to us on a postcard! The motorway trek home was trouble free, stopping only for a bit of food at the services on the M6. We eventually got home around half 7, and the sun was still out. All in all a good day out. 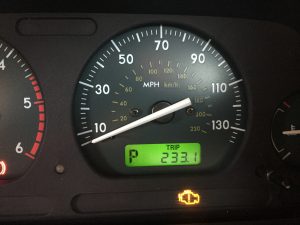