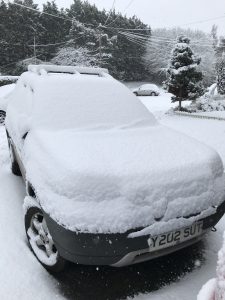 Sunday 10th December 2017. Snow seemed to be the order of the day, and taking the Freelander out in it was something I had been wanting to do for a while. Luckily for me, it snowed a lot at the start of December. The only opportunity I had to drive any distance in it was to a Fish gig in Leamington Spa. I went with a friend of mine who lives out in the sticks and the sad fact of the matter is that that was the trickiest part of the drive. The Freelander handles well in snow. It is just the right weight and the power matches the car perfectly for snowy conditions. Slow and steady is the way forward. Once we got onto main roads, there and back, it was clear running. Basically it was a bit of a let down on the driving front. The gig was brilliant, however, and he played all of the old Marillion album ‘Clutching At Straws’. Was this the end of the snow? Time will tell….