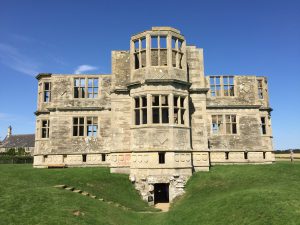 Sunday 27th August 2017. Having blasted the car around France and the south coast of England, I thought we should not give it too much of a bettering on the last weekend of the Summer Holidays. That said, the sun was blazing down and it would have been a shame to let a day go to waste. Once ready, we headed into Leicester as per usual to collect Ash and also Erin as she had had a sleepover at Ahsley’s. We got to the Phoenix around half 10. Shani and I ordered up some coffee and a small breakfast whilst we waited for the other two to get there. We sat outside and by the time they arrived it was boiling hot. A brief conflab led us to select a National Trust property just under 30 miles away called Lyveden, in Northamptonshire.

It was an easy drive down there, and the driveway into the actual property is a 4×4 owbers dream, long, windy and barely tarmacked with potholes and verges galore. Those in less fortunate vehicles were crawling along. We even had to overtake someone they were going that slow. Once parked up we strolled down to the tiny reception area to check in and get our NT Passport stamped. It was then onwards into the grounds.

This is not one of those properties with a multitude of activities. On the surface of it, the actual house appears to be a ruin, however this is not the case. It is an unfinished Elizabethan Lodge. It was began by Sir Thomas Tresham but subsequent to his death in 1605 all work ceased and the building has been left that way ever since. It is still a testament to the engineering skill of our forefathers, and you are able to explore the building albeit from the ground floor only, and one perilous spiral staircase that goes up to a more recent mezzanine floor. The rest of the area is a moated garden and orchard. In the weather we experienced, as the photo’s will show, it was beautiful. A lot of time was spent photographing the grounds, and the sun was beating down steadily the whole time, so a food break was required. We managed to grab a table inside the small coffee shop and had some sandwiches and cold drinks. The poor people sitting outside were being swarmed by wasp’s who were energized by the heatwave. 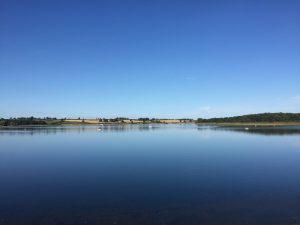 Around 3pm we decided to head off. After a few detours and some fun country lanes we came across Brixworth Country Park, located on the edge of Pitsford Reservoir. How we had never come across this before was a mystery to all of us as its only 20 minutes or so away from home. There is a large park, with a big children’s play area, a coffee shop and a great walkway around the reservoir. Owing to the park being rammed on such a hot day, we went for a stroll. Shani struggled, so we didn’t go far, but we got some great photography done. We were all pretty tired due to a combination of heat and exercise, and a quick run down the A14 and then the M1 saw us home in the early evening.