This site was originally set up for our old company Eary International Associates Ltd, back in 1998. Previous to this we had an old CompuServe account which served as our online presence for a 3 or 4 years. As the trading company side of the business was on the wane, ironically in part due to the rise of the Internet, we started to concentrate on offering our Website Development services, under the banner of EIA Web Development. Below are screenshots of the first and second incarnations of this site, which were only a few months apart: 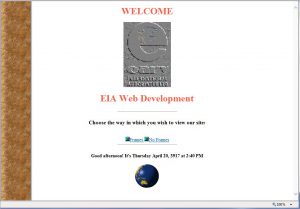 As we started doing more business with the USA, we had to make some changes in 1999. This involved adding in a section for the 01-01-00 brand name which we were helping to promote in the UK and Europe.

The site changed again in 2001 to reflect the new areas we were working in. This was primarily in the Multimedia world of CD Business Cards. We were one of the first four companies offering CD Business Cards into the UK, and Yahoo UK even created a category for us (back in the days when categories were a thing), and for a while we were the only listing in that category. 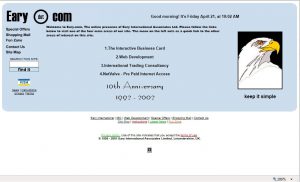 As the IT side of the business expanded, so did areas on the website. This version was from 2004 and stayed that way more or less until 2011. It all came to an end in 2011 when the commercial aspects of the site were taken down, as this had long been superseded by the new business (EDC Support Ltd). As from 2013, the site remained up as a memorial to Michael John Eary, who passed away on 5th April 2013. It stayed that way until 2016 when this version replaced all before it.