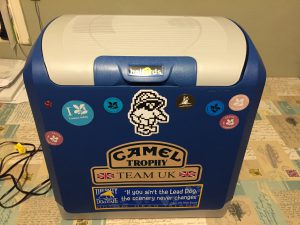 Back in the summer of 2016, England experienced something unusual. It got hot. We are used to sporadic heatwaves, but the fact that anyone who can remember rants on about the summer of 1976 demonstrates how unusual this weather phenomenon is. As a result, we discovered any food transported on our trips either melted or cooked itself whilst in the picnic basket.

A plan was hatched to prevent this. It involved a trip to Halfords, and then I had to part with some cash. Not a lot of cash as it happens – about £50 (which is about US$65 for anyone outside of the UK reading this – and my ego would like to think that there are many). The exact name of this model is the Halfords 24 Litre Electric Cool Box.

We had purchased a great little Cool Box that you can plug into the 12V power socket (3.3 amps, 40 watts, 2.7 metre power cord) and which has a cooling system built into the lid. It has been a constant companion ever since. We throw in a couple of the blue ice blocks just to kick start the cooling process, but so far it has not let us down. It has the typically robust quality we have come to expect from Halfords own brand products. We have seen some more expensive, and a few bargain basement models in the discount supermarkets, but I suggest going with this range. If you do forget to plug it in – which has happened on more than one occasion – any cold food will still remain cold for a few hours as it servers as a conventional cool box when not powered.

Not only does it keep our food fresh, but it now serves as a place to put all the stickers we gather along the way (as the picture will testify to). Invaluable on any day trip or, we hope, camping trip. A quick 2019 update – the fridge is still going strong and was used on a 3 day trip recently. It worked really well, to the point that I inadvertently froze something in it by leaving it exposed to the elements and powered on. 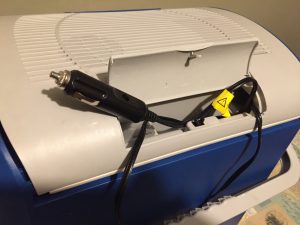 Power cord stores in the back of the lid 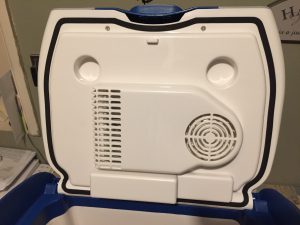 The Cooling system in the lid