23rd July 2017. A frantic start to the day saw me rushing around getting the car ready (unloading kit, then loading it with a wheelchair) then using an entire loaf of bread to make some egg mayonnaise sandwiches. I also managed to change the bulb in the drivers side headlight. Once set, I got the girls into the car and we set off to get Ash. We met him at Lidl and got a few picnic supplies, just like last week. The clouds hung heavy, as we headed over to the home of the sauce. Initially thought to be closer than it actually was, the drive consisted of dull motorways most of the way there (M69, M6, M42 then M5 – just in case you were interested). The roads only became interesting as we got closer to Croome Park. Despite the downpours en-route, when we eventually arrived, the sun had come out and proceeded to stay out for the majority of our stay. 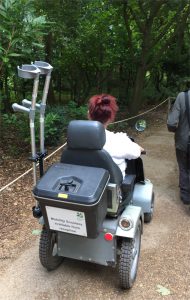 Croome is massive in terms of land. To get to the actual house from the car pork is a good 5 to 10 minute walk. With that in mind, we hit the picnic before venturing out. It also meant that Shani would not be able to get around, but luckily the National Trust has mobility scooters you can borrow. The ones here were like mini Land Rovers and could go over any terrain. It made life easier for us all as we dumped our rain coats in the storage on this behemoth of a vehicle.

Whilst historic in a very old sense, there was also some modern history. During World War 2, Croome was a secret Radar base fro the RAF. As such, they have kept part of the old Medical facility open and turned it into a museum. There is also a small hanger near there with the cockpit of a Canberra jet, which used to carry radar equipment in its nose section. All very interesting. Once of the volunteers in the Canberra exhibit used to fly in them and its well worth a chat to him about the aircraft. We headed up to the house. Before you get there, there is a church at the top of the hill. We had a look in there first. The tombs of nobles past never cease to amaze me. They are vast and opulent and seem disproportionally grand. They clearly had money to spare and were concerned with appearances even in the after life. Two such tombs are in said church, up by the alter.

The trek to the house from there was long, but at least it was downhill. A long and winding track, where we had to keep pausing to let the golf buggy transport from the car park over take us. The house, like most of the National Trust houses, was huge. there were some very notable features though. One room had been completely ripped out and sold (floor, wall and ceiling included) to an American who had it reconstructed in the Metropolitan museum in New York. the wall was then put back together using anything they could find, including old doors. There was also a rather horrible bathroom that some clueless property developer had installed in the 1990’s. It is so hideous and out of keeping it makes you wander how he earned enough money to buy the property in the first place! The have a rather unusual shoe exhibition in the basement, which is also where a lot of activities for children are housed. Erin enjoyed this part more. After we toured through the rest of the house, it was time for a drink. There was an Orangery with a small café opposite the main house, so we walked/drove up to it for a quick coffee prior to leaving.

We decided to head off around half 4. As we were leaving, a couple of ladies had a flat tyre. I went over and changed it for them which took a few minutes longer than I expected! Feeling like a good Samaritan, we left Croome happy, if a little later than planned. A quick consultation with the map helped us decide a scenic route home. We headed cross country towards Stratford Upon Avon. Once we got to Stratford, we went for a stroll down to the canal, and had a quick look in the RSC gift shop. Erin, of course, left with some souvenirs. We took back roads home, and paused to finish our picnic (around half 7), slightly off course, at Coombe Abbey. Once a delightful country property, this is now a hotel and the grounds around it now somewhat dishevelled. We didn’t stop too long, and were soon journeying home, dropping Ashley back in Leicester before making it back around 9-30 pm.