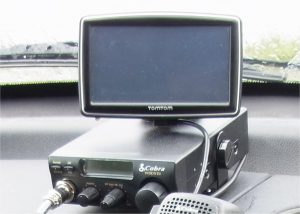 I have been a fan of TomTom Sat Navs since I got my original Go 500 about 12 years ago. I later upgraded to an XXL IQ Routes model, which we currently use. It was adhered to the windscreen with the supplied suction cup bracket, but we now have another bracket (official TomTom) that is stuck to the top of the CB. Gives me more vision out of the window, and the bracket is not subject to falling off the windscreen in certain situations (too much moisture in the car generally). It has never gotten us lost and is adept at picking up our route as we randomly veer off course looking for more interesting sights. I have only updated it once fully, and most of the maps are still relevant. Although it is invaluable as a guide, remember that Sat Nav’s are only useful if you know where you want to go. They get you from A to B. We still use a regular map to locate places we want to visit, then we sat nav it. I recently updated it for a second time, due to wanting up to date French maps (this came with full European maps) however the memory is limited so I only installed the required area UK and parts of Europe – France, Holland and Germany were included. It performed brilliantly in France and got us door to door with no problems.

Unfortunately, TomTom have stopped supporting the XXL Classic as from the end of 2017, or thereabouts, so we have a new Sat Nav. Staying On-Brand, it is another TomTom – the Go 620 EU. Slightly bigger screen and totally different operating system and map layout. Initially I was not impressed, however after a bit of use, its great. There is a lot more information available on the screen, which is also an inch bigger than the old model. It still has a suction cup mount for the windscreen, but the unit attaches to this by way of magnets. A much easier method of attachment! All in all, a good purchase.